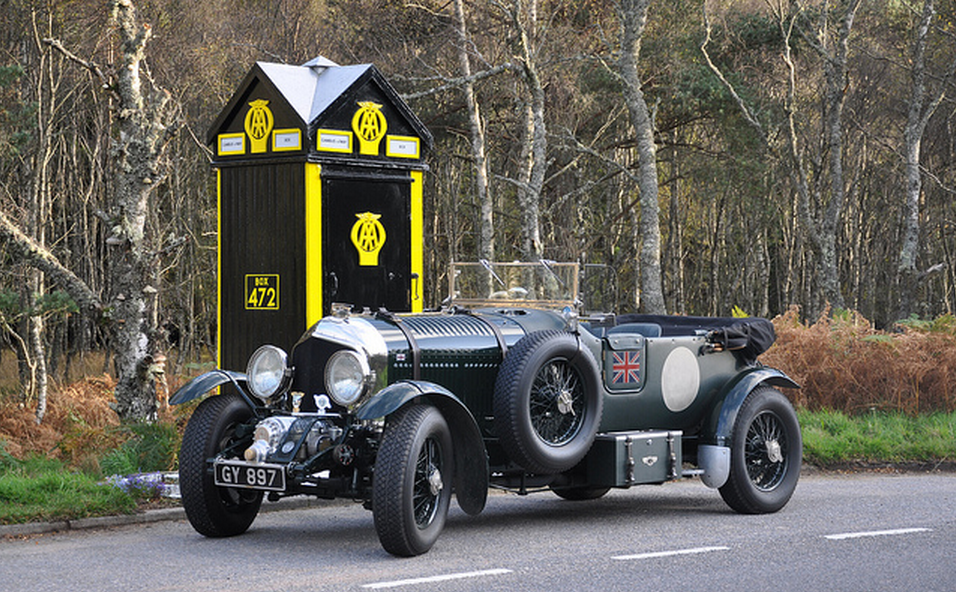 Renovated Automobile Association Box No 472 (Cambus O' May Box) can be found on the South kerb of the A93, Aberdeenshire, approx 4.5 miles East of the village of Ballater, 250 yards East of the Cambus O' May Hotel entrance and approximately 175 yards West of the B9119 turn off .

Box 472 is the only AA box within the Cairngorms National Park and one of only 8 to10 original boxes (from an initial 1000) estimated to be remaining in their original location within the United Kingdom. Most of these remaining boxes are located in Scotland.


There are several on display at motoring museums throughout the UK.


(The car is a supercharged 4.5 Litre Bentley Blower owned by Mr Steve Kew of Aboyne)

The AA began making such boxes around 1912, but the popular and long-sustained cross-gable roof design (pictured) was first developed in 1927, originally the boxes were known as sentry boxes and provided shelter from the elements for their patrolmen who rode motorcycles with a sidecar attached.

The first one erected was in 1911, these buildings were intended as shelters for road patrols. Over time, they came to be used by AA members.

A stranded motorist had nothing more to do than call and give the number of the kiosk, and help was on the way.

The easily recognized logo meant that a traveller could find a light, maps, fire extinguisher, and many other items whenever they were needed. Through to the year 1919, AA watchmen (who were called sentries) manned the booths. They stood at the ready to serve any travelling member of the Automobile Association.

They provided roadside assistance, communication, directions, and even sometimes medical help or transport. In 1920 AA members received keys to call boxes for independent use.

When you joined the AA you got a key that fitted the lock in any of the telephone boxes. If your car broke down, you walked or hitched a ride to the nearest box, opened it up and called the AA for help. If it was raining or cold, you could stay out of the elements until help arrived.

The boxes were each individually numbered, about 1,000 in all at the height of the system's popularity, even if you did not know exactly where you were, you could say, "I'm calling from Box Number 472" and a patrolman would be dispatched to assist.

As the influx of mobile phones rendered the old AA roadside emergency boxes obsolete, most have completely disappeared due to neglect and a few have been declared listed buildings (Box 472 is one) and usually restored by local volunteers for there has been no official restoration programme in operation at any time.  Being 'listed' or 'protected' means very little, sadly, the heritage organisations although meaning well, do absolutely nothing to save these fantastic items of social history It is left to individuals to save them at their own expense and time.
It is estimated that there are around 8 to 10 boxes left in situ within the United Kingdom in varying states of repair and unless saved by volunteers will disappear completely in the very near future.

Box 472 located within the Cairngorms National Park, on the main approach to the idyllic 'Royal Warrant' village of Ballater and being in an extremely poor state of repair it was thought by many local residents that the box was not offering the desired view that would and should be expected by tourists visiting Scotland, Aberdeenshire, Royal Deeside and a National Park.


The following pages of the site will offer a pictorial record of how Box 472 was refurbished by five local volunteers and transformed into a 'mini museum' that includes a visitors book, historical pictures and artifacts from years gone by..............

Click on the 'PROJECT' link below  for the continuing story 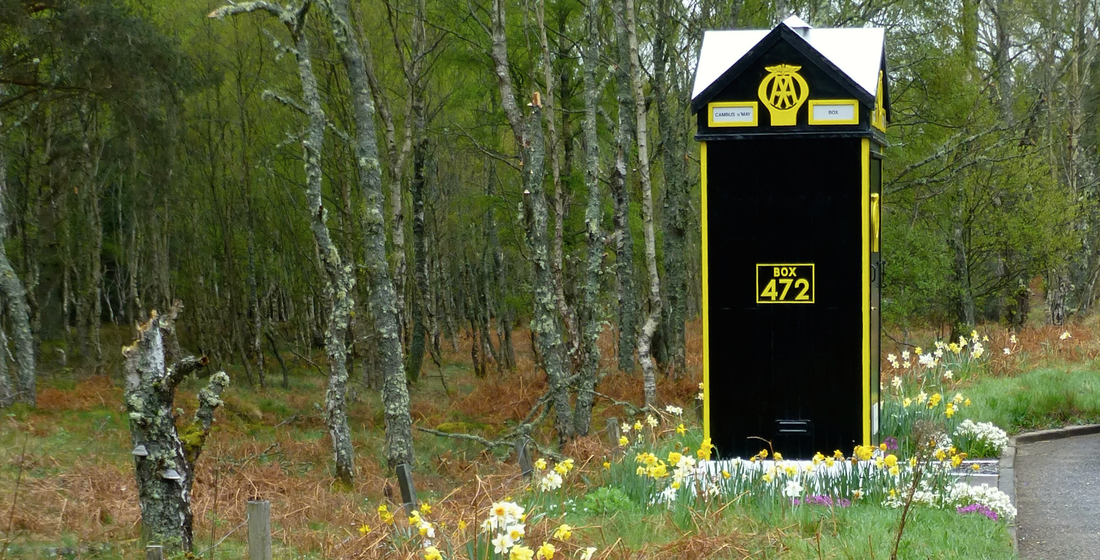 Springtime At Box 472, 2014
The ONLY remaining original AA box in the UK in its original location that is open 24/7 and houses a 'mini museum' offering travellers the opportunity to sign the visitor's book and add a comment.

Location Of Box 472, Lower Right Hand Square, Blue/White Star Adjacent To Junction Of A 93 & The  B9119.
website counter